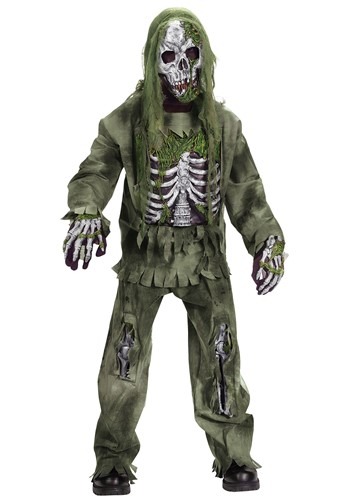 You and your kid have a running joke: that before school, he's basically a zombie. There' s no other way to describe the lethargy and stumbling! You get him up (after his alarm goes off 30 times) and then basically only hear grunts and monosyllabic words from him until he gets on the bus to go to school. He drinks his OJ with his eyes at half-mast, he accidentally destroys things by running into them, in fact, we're pretty sure he's just sleepwalking most days. Either way, your joke has sort of caught on, and now he wants to dress up as a zombie more often—you know, to get in touch with his true nature.

But now, he's spied this Skeleton Zombie Costume and it's all over. THAT'S the kind of zombie he wants to be! Scary, ghoulish, a bit of a mashup of the underworld's best and brightest. Your kid has a great sense of humor! We think this look suits him quite well, actually, especially between the hours of 5:45-7:30 a.m. Though we will say, pancakes sometimes snap him out of it a bit early.

This look gets a lot of its scare factor from the included latex skeleton mask with mesh over the eyes. Creepy! But he'll also get a brown shirt and pants with shredded cuffs, and bones attached to the torso and legs. Skeleton gloves are the finishing touch. Just imagine waking up to this in your kitchen every morning! See, things could be worse.

Who knows? Now that your kid has this costume, he may begin channeling his inner zombie-skeleton more often. Maybe he'll even develop a new schedule for haunting, leaving the mornings to be filled with cheer, heartfelt hugs, and a bright-eyed, bushy-tailed "Bye!" as he runs to catch the bus! It's a big maybe.