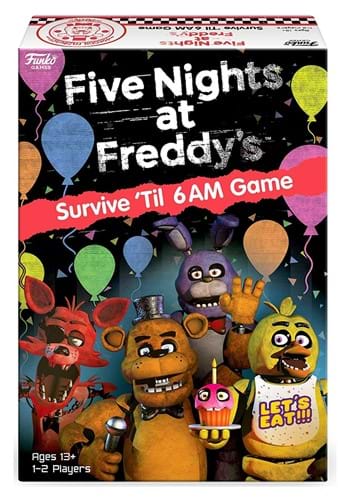 Next Level of Freddy Fazbear's

So, you've been hired to watch over the weird happenings at the local haunted pizza place. What could go wrong, right? You've watched all the security footage. You've played all of the Five Nights at Freddy's video games... so you even know where those terrifying animatronics are going to be. Perhaps you know the truth behind the Purple Guy or even know where you can find the most mysterious birthday party out there. But, as any FNAF fan knows, there is always another tale to be told. When you become the security guard in real life, will you be ready!?

Discover if you have what it takes when you and a buddy play the Funko Signature Games: Five Nights at Freddy's game! This is a 1-2 player board game that simulates the creepy world of FNAF. With dozens of illustrated camera cards, a pair of power dice, and the 13-hour clocks ticking away, you'll have to bring all your strategic power to bear to win out the evening. Make sure the equipment is in working order and watch out for the wandering animatronics. Each turn, you will check the camera cards and then react according to the movements in the dark! Work together (or against each other) to keep the power levels gleaming while you pray for 6 am to come.

Working late hours is already a pretty tough gig, but you've got to wonder why this job has so much turnover! Is it the old pizza? The creepy animatronics that stalk the halls? The fact that your boss only communicates by answering machine? (Yeah, it's definitely Freddy!) If you've loved the video game, you're in for some serious strategic fun with the Funko Signature Games: FNAF Board Game. For once, it won't be the jump scares that get you!