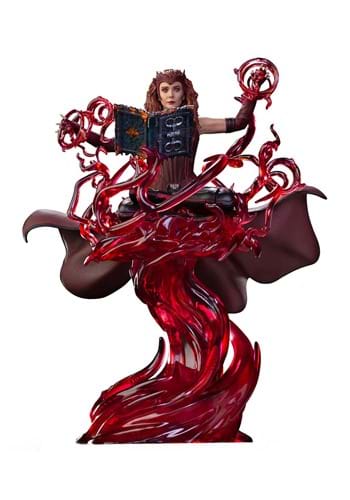 The fourth phase of the ever-growing MCU introduced its fanbase to many more characters from the Marvel comics. It also expanded on some of the superheroes that were introduced in the earlier phases. Scarlet Witch was one of those characters that fans all around the globe got to see a lot more of during the fourth phase. She had her own mini-series on the Disney+ streaming service and was one of the headliners in the 2nd Doctor Strange film, Multiverse of Madness.

The Magic Is In The Details

Proudly add this powerful magic-wielder to your MCU figurine collection when you grab this exquisite Scarlet Witch WandaVision Deluxe 1/10 Art Scale Statue. This collectible features Wanda Maximoff, as portrayed by Emily Olsen, in her full Scarlet Witch costume. She is floating in the air cross-legged while she casts a spell of magical tentacles that whirl around her. Some of those scarlet tentacles are even holding the ancient dark magic spell book known as the Darkhold.

Invite Wanda into your home today. You won't need to worry about her tearing your house apart with her sorcery. As long as you have a Doctor Strange figure nearby, this unpredictable super-witch will be kept in check!