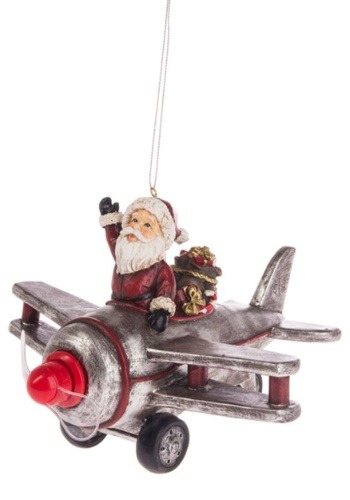 Santa's sleigh is a hoax. A ruse. A folk tale. Once upon a time, Santa did use reindeer to pull his sleigh. But that was a long time ago, before the population boom and major industrial advances. Santa moved on to prop planes. Now, we hear he has a specialty jet with just a red Santa hat painted on the wings. But come on...the world has nearly 8 billion people. The whole "sleigh" story just doesn't hold up.

Of course, Santa has also since moved on from this retro prop planes. But this Santa's Airplane Light Up Ornament pays homage to an important slice of his history. It also really lights up, and when turned on, the propeller spells out "Merry Christmas." Cool, huh? Believe it or not, that's the kind of technology Santa's known to love.

So, show you're in the know by hanging this piece on the boughs of your tree—but make sure you keep the secret. If your kids ask, just tell them you thought it would be funny to imagine Santa flying another way. They'll agree it's TOTALLY silly. Wink, wink.