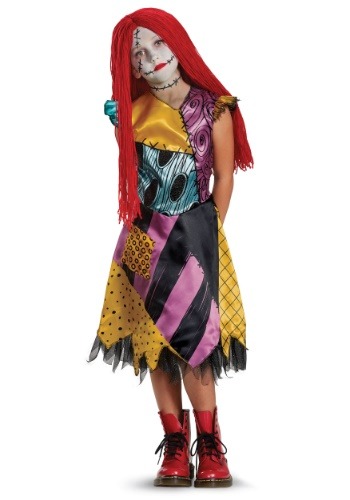 Growing up in Halloween Town isn't easy. For one, it's nearly impossible to get a full night's sleep when vampires and goblins have a full run of the town. Secondly, it's hard to find anything to nibble on that doesn't taste like frog's breath or Wormwood. Thirdly, all the other little trick-or-treaters around town are closely aligned to the Boogeyman and as catchy as that guy's song is, we wouldn't want to be bosom companion's with an evil burlap sack that's full of bugs.

So, you'd think with all that danger lurking about every corner, Sally would be okay with staying in the isolated tower that her mad scientist maker keeps her in. Here's the thing though, we all know that kids are curious, they've got to roam. Sally's many escapes might have been a little more dramatic than any of your child's rebellious acts. She's defenestrated herself from the tower window and when she came apart she simply sewed herself together again. She would have made a good boy scout because when she escaped she was always prepared. You kind of have to be when you're growing up in Halloweentown, you never know what might happen!

If your little girl wants to dress up like Sally, don't get worried about her putting nightshade in your soup, there are so many other reasons to emulate this character. Sally is strong, smart, and she doesn't follow the crowd when everyone is on board for a seriously bad idea. Your little one will feel elegant and spooky at the same time in this satiny patched dress. The dress has a ragtag cut along the neck and hemline that's offset with a sparkly tulle. All she needs to finish the look is some stitched up makeup and Sally's long red locks. Halloweentown might be a scary place, but your little Sally has got this one in the bag!