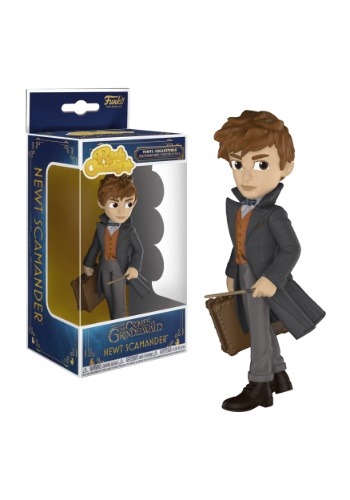 No one has ever called Newt a charmer... no pun intended. The thing is, this guy is focused on bigger things than the witches and wizards around him. Smaller things too. He doesn't notice the simpering looks of his assistant and he hardly notices when what he says is slightly offensive to the humans he actually likes. No, he's spent too much time learning about the breeding habits of Nifflers and the dietary restraints of Kelpies to learn the charming ways of basic human company.

Newt's not the most polite guy, that's how we like him! That's why he's not just sitting quietly in this Rock Candy figure. He's on his way to solve a problem, to track a beast. His wand is poised and ready for anything. We're just wondering what animal he'll stow away in that bag next!

There's no need to grab hold of a port key to find this figure, simply order this Rock Candy statue and watch as your collection becomes more magical! Want an extra touch of drama? Add young Dumbledore to your order for a duo that'll protect the Wizarding World for decades to come!