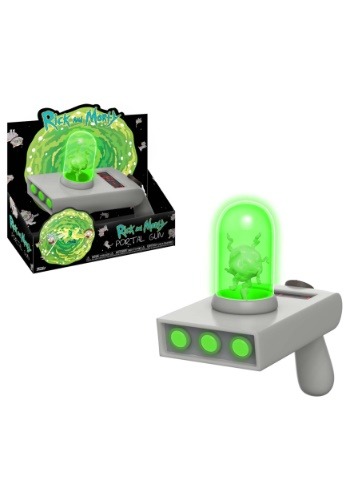 It must be nice being Rick Sanchez. When everything goes awry, he can just whip out his handy portal gun to get the heck out of Dodge. Just point, shoot and KAPOW! A new portal to another dimension appears. Even when the entire world is taken over by Cronenberg monsters, he’s always just a quick jump away from Pizza Universe (the universe that’s completely populated by pizza people).

Unfortunately, we’re not Rick Sanchez, from Rick and Morty, so we’re just stuck awkwardly here in this dimension for the rest of our lives. The good news is that we found out about this Rick and Morty replica portal gun.

Now, this toy portal gun might not actually help you travel to the Pizza Universe, but it does do a smashing job of recreating the iconic gadget seen in the cartoon series. Just squeeze the trigger and the gun lights up and makes sounds from the show. It might just make you feel like you’re about to head on an adventure in another dimension!

Great for Cosplay or a Gift

If you plan on cosplaying as Rick, then you definitely want this toy replica, but it also makes for a great gift for any fan of the series!