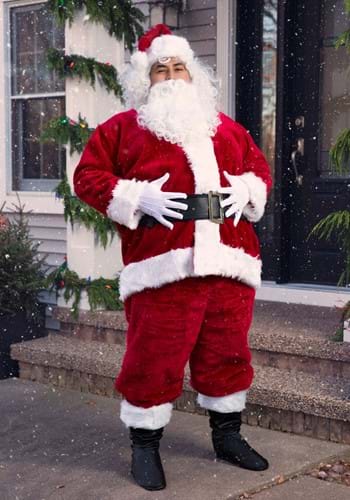 If singing loud for all to hear is the best way to spread Christmas cheer, then dressing up as Santa Claus must be a close second. Who doesn't like to see Santa Claus? We're an adult and even we still love to see Santa Claus. We'll even sit on his lap! Sure, that Santa might just be our friend who works in accounting, but that doesn't mean we won't hop up in his lap and tell him what we want for Christmas! Something about seeing this big red suit and the bright white beard just brings the kid out in us.

This costume will turn you into everyone's Christmas icon! You'll be wearing a red jacket with a front zipper, and matching pants! Both are styled to look just like Santa's classic jacket and pants. We've included Santa's belt, and boot covers so that you can turn any shoes into Santa ones! We've also included the white gloves and the hat. The hat is almost as important as the jacket, can you imagine seeing Santa without his hat? We don't even know what that would look like...

If you were to see Santa, what would you ask him for? Think big! What do you want more than anything? We know what we would; A hippopotamus! Ever since we heard that song, we've been dying to get one! Do you think Santa will bring us one this year? We don't know how he'd get it in our house...