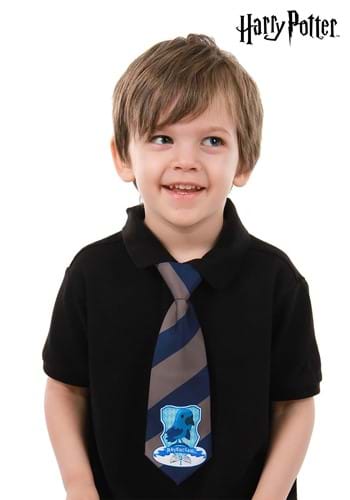 We’re sure you’ve noticed that your toddler has quite the head on his shoulders. At such a young age, he is already proving to be a witty, creative intellect. Since you’re a fan of the Harry Potter franchise, we're sure you know what that means for your child. They’re on a one-way track to House Ravenclaw.

Some would argue that Ravenclaw is the best of the four Hogwarts Houses. They don’t rely on bravery and dumb luck like the lionhearted Gryffindors. Nor do they consider themselves superior based purely on bloodlines as the snaky Slytherins often do. And, well, they’re clearly better than the Hufflepuffs. With their natural talents and studious diligence, the wizards in House Ravenclaw fly high above their rivals.

Let your little one start showing pride for his soon-to-be home at Hogwarts when you grab him this Ravenclaw Crest Toddler Breakaway Tie. It features a strong color combination of blue and bronze as well as an adorable version of Ravenclaw’s house emblem at the bottom. The tie is a perfect accessory for aspiring wizards. Your kiddo, like his parents before him, will be a part of the greatest house in the greatest school of witchcraft and wizardry.