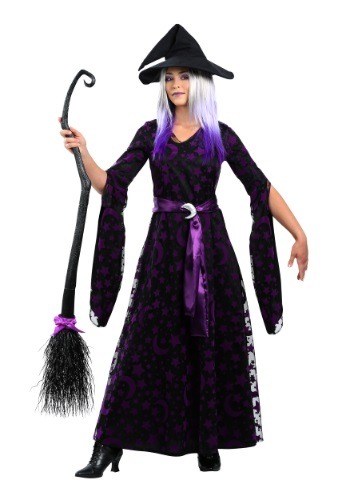 Being a witch would be really awesome. That being said, there would be some serious downsides that you probably haven't considered. We're not talking about the Salem witch trials, think smaller than that. Like where would you get your groceries when you become a witch? Think of all the weird stuff you need to make your potions, you can't exactly buy eye of newt or hemlock roots at your local grocery store.

What about putting a license plate on your broomstick? Where on earth do you mount a license plate? There is no good spot, it'll make your broom look super tacky. But, if you don't have one, the police are going to be obligated to come after you, even though they probably don't want to mess with a witch. It's just going to turn into a big hassle that no one wants to deal with, you'll probably end up getting a ticket... See, being a witch comes with real problems too, right?

This costume will leave you itching to brew up some crazy concoctions! You'll be wearing a stunning yet dark dress and overdress, and the overdress is decorated with the moon and stars, meaning you'll blend right in as you fly your broom through the night sky! We've also included the purple belt sash and the classic witch's hat. The belt comes with a moon emblem on the front, and the hat, well, it wouldn't be a witch costume without a witch's hat!

A WITCH'S LIFE FOR ME

Sure, those problems we listed earlier would be a hassle, but who are we kidding, being a witch would be amazing. We are just jealous, we would love to be able to use magic! We hope you have a ton of fun with your witch shenanigans, don't take it for granted! Just because you need to go find your own hemlock roots doesn't mean you have it that bad. Have fun!