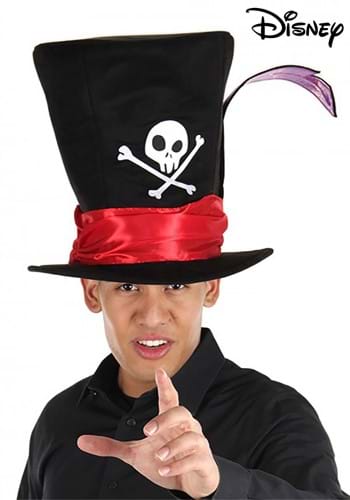 Hang out with your friends from the other side when you dress up as the evil bokor, Dr. Facilier. You’ll know him from Disney’s 49th full-length animated feature film The Princess and the Frog. He is a sneaky and scheming witchdoctor that plans to take over the world with his supernatural powers.

Even with such a devious plot, everyone still loves this Disney villain. One thing we love about him is his voodoo fashion. Take his hat, for instance. It is simple, yet memorable. Now you can add this hat to your Dr. Facilier costume.

This tall black top hat looks just like the one seen in the animated film. It has the red satin hatband wrapped around it as well as the deep pink feather tucked into the band.  Printed on the front of the hat the skull and crossbones symbol. A fun added feature of this top hat is the lining that has a hidden pocket. There you can stash your ID and some cash while you party the night away.

Change It Around Some

On Halloween, you can give everyone a tip of the hat when you go out as Dr. Facilier. Have some fun, make some deals, and take over the world!