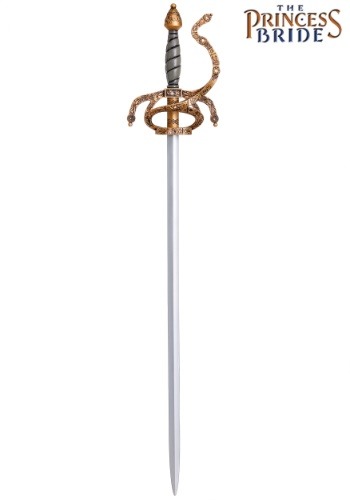 An Oath of Vengeance

You'd be more than a little angry too! Let's say, hypothetically, the six-fingered man just waltzed into your home, demanded your father's finest sword, and then tried to scam him out of money. That would be enough to make anyone's blood boil! But for Inigo Montoya, that was only the beginning. The six-fingered man proceeded to murder Inigo's father... maddening doesn't even begin to describe that! Of course, Inigo took sword in hand and began a lifelong quest to avenge his father.

Now, we're not suggesting that you head on a mission for vengeance, but taking up the iconic sword might just inspire you to channel your own feelings into a lifelong goal... or at the very least it will help you create the most authentic Inigo Montoya cosplay of all time!

This Princess Bride Inigo Montoya Sword Accessory is a toy weapon inspired by the master-crafted sword from the movie. It's made out of molded plastic and has a beautifully shaped pommel with a series of faceted faux gemstones. The blade of the toy measures 36 inches long, making it quite realistic in shape and size. When you pair this up with your Inigo Montoya costume, you'll be ready to complete you mission of finding and defeating the six-fingered man!

Monster Responds...
Hello! It does not include the scabbard, only the Officially Licensed Inigo Montoya Sword.
Answer
Ask a Question
Reviews