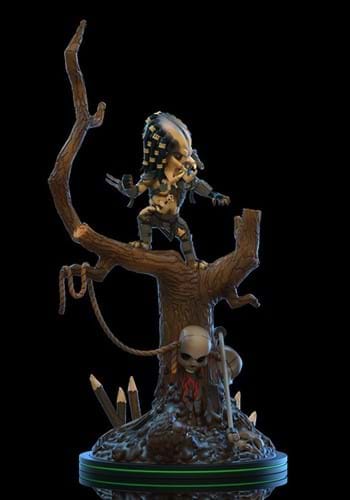 Can you imagine it? Covering yourself in a thick layer of mud, in the middle of the jungle, waiting patiently for the galaxy's greatest hunter to show up. Any second, you could be dead! That's what Dutch did in the final moments of the 1987 action film, Predator, and that's the incredible scene that this Predator Q-Fig Max Elite Figurine captures. The statue has a base covered with mud, skulls and little surprise. Dutch's mud-covered face peeks out from the bottom, waiting to ambush the Predator, which is perched on top of a decrepit tree. The coloring on the figure is fantastic, capturing some of the muted browns and splotches of blood. Of course, it's all done in classic Q-Fig style, so it adds a slight layer of cuteness to the whole thing! If you're a fan of the iconic film, then this Q-Fig needs to be in your collection today!