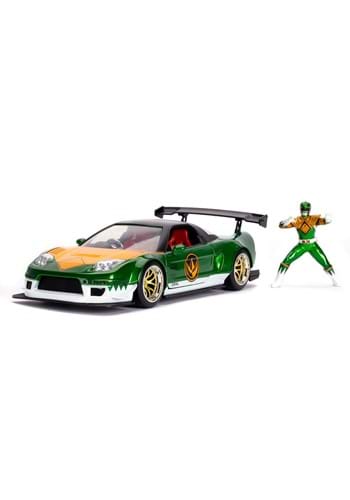 "Whoa! Tommy, what happened to the Dragon Zord?"

"Huh? That old thing? I traded it in for this baby."

"Yeah, the dang thing just wouldn't fit in my garage."

"But what about Lord Zedd?"

"What about him? The Dragon Zord got terrible gas mileage."

Looks like the Green Ranger did a little upgrade! He's traded his Dragon Zord in for a '02 Honda NSX and it's rather magnificent! This officially licensed Green Ranger set comes with a 1:24 scale version of the card, made out of die-cast metal, and has moving parts, including a hood and car doors that open. It also comes with a small, die-cast metal version of the Green Ranger. They're a great pair for toy car collectors and Power Rangers collectors alike!