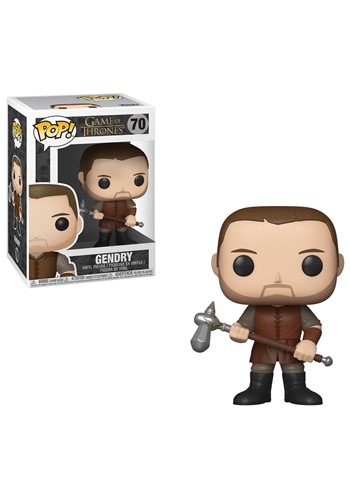 You, like the rest of us, had to wait 4 seasons for Gendry to reappear on Game of Thrones. Well, he's finally back in season 7, and bada-boom bada-bam, it's warhammer time! That's right, he's ready to team up with Jon Snow and he's even forged himself a warhammer just like his father Robert Baratheon was known to use in battle. So, you know what to do next. Get him in Pop! Vinyl form!

Straight from our friends at Funko, this Game of Thrones Gendry Vinyl Figure is one of the newest additions to the Pop! Television series and is HBO officially licensed. It's styled just like the character on the show as he appears in season 7, complete with a warhammer in his hands! Just like every other Pop!, this figure stands about 3 3/4" tall, and comes to you packaged in a window display box. An adult collectible, this item is recommended for ages 17 and up due to adult themes on the show. Be sure to take a gander at all of our Game of Thrones Pop Vinyls so you can assemble your own team of heroes in time for the final season!