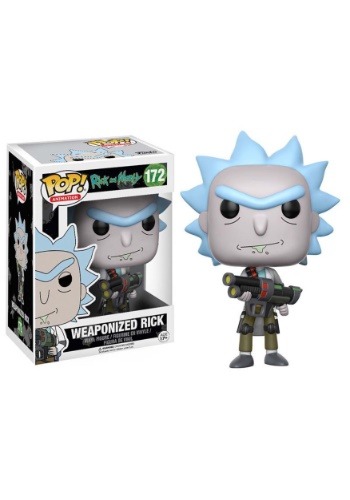 You'd think the guy who could change the shape and fate of our universe could finish a thought without burping but what you think doesn't matter according to good ol' Rick! He might not be the most polite or even have a hint of what polite society would call morality but that doesn't change the fact that he's got the strongest brain and the hardest working liver on our planet. This guy knows how to get what he wants, though he certainly doesn't know how to make life easy for himself! For instance, he could have gone to counseling rather than turning himself into a pickle. But hey, you never know what's going on in a genius's head.

This Pop vinyl figure shows Rick weaponized and ready to go. We don't know what he's after but whatever it is, we hope it deserves it. As we said, Rick gets what he wants. This statue stands at just under five inches tall so he'll fit right in with the rest of your Rick and Morty figures. Hey, maybe he'll even inspire some kind of genius invention!