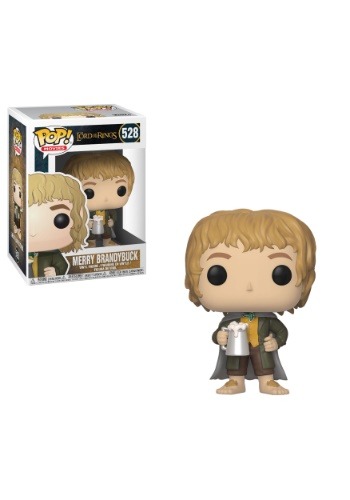 When we met Merry, we didn't think he would end up being a hero. He not only surprised us, we bet he surprised himself. He starts off as a major foodie and a little bit of a mischief maker. Deprived of elevenses and second breakfast, he put away food like no one else on the trail (except Pippin perhaps), lembas bread anyone? But his skills aren't limited to jigging on pub tables and getting himself roped into epic adventures, he ended up playing a big role in saving the day. If he hadn't thought quick on his hairy little feet and sliced at the legs of the Witch-King, Eowyn wouldn't have taken him down and won the Battle of the Pelennor Fields.

So, whether you want to celebrate the small but strong or you simply want to add the brave Merry into your Lord of the Rings collection this POP Vinyl figure is perfectly adorable. He's sporting the Elven cloak, his hairy feet, and carrying a nice pint of beer. Maybe he'll even inspire some great jig moves!