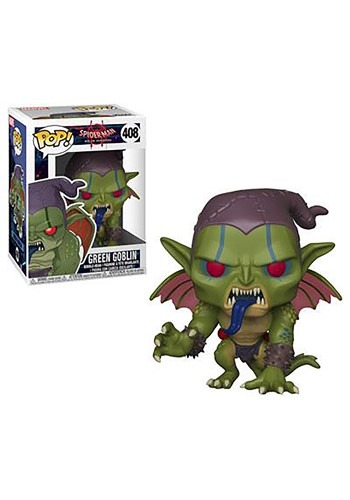 NOW, BE A GOOD GREEN GOBLIN

Will the Green Goblin ever just be a good guy? Will he ever ride around on his Goblin Glider in peace without wreaking havoc in the city? Instead of tossing Pumpkin Bombs that emit harmful vapors, why not toss out candy and other treats instead, similar to a parade. Everyone would think of him as a superhero instead! While he glides through the air, throngs of people would chase after him, pleading for a lollipop or peppermint. But if there's one thing we learned from watching all the Spider-Man movies and reading nearly every comic book, it's that the Green Goblin will never stop causing chaos for the friendly, neighborhood Spider-Man...never! That being said, the Green Goblin Pop! vinyl figure is the safest way to pal around with the notorious villain. Keep him nearby by standing him on your work desk or dresser drawer.

The officially licensed Spider-Man: Into the Spider-Verse- Green Goblin Pop! stands at approximately 4-inches tall and capable of standing on itself without a stand. The figure is depicted with a long, slithering tongue, fangs, wings and claws.

WELCOME TO THE SPIDER-VERSE

Create the Spider-Verse in the comfort of your own home by collecting all the Spider-Man figures in this series.