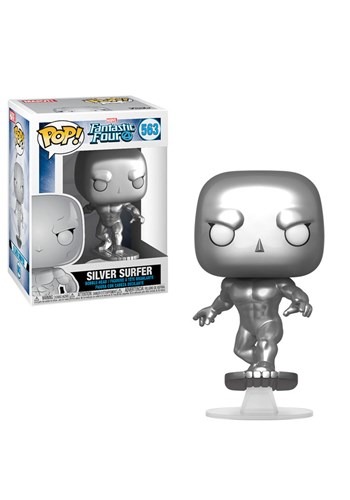 It's true. The Silver Surfer sort of looks like a chill dude that you'd run into on the beach, but he actually has a deeply tragic past. There's a lot of weight on those silver shoulders. Galactus has forced him to become the herald of doom for planets across the universe in exchange for the lives of those on his own planet. That's why even the Funko POP! version of the Fantastic Four character has a troubled look on his face.

This POP! Marvel Silver Surfer figure is inspired by the classic Fantastic Four character! He comes in tones of metallic silver and is made out of molded vinyl. He comes standing on his ride of choice, a surfboard made out of cosmic energy that allows him to travel great distances in the void of space! Of course, he won't be doing any of that when he joins your collection. He'll just stand next to your other figures, contemplating the level of destruction that his employer, Galactus, has caused over the years. We recommend pairing him up with Mr. Fantastic, the rest of the Fantastic Four. Maybe with their combined might, he can finally break free from Galactus' control!