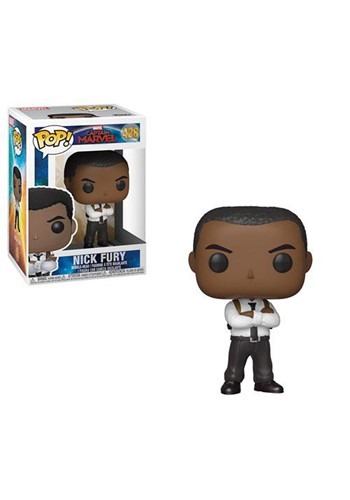 Looking good, Nick! Wow, you know, we were beginning to think that you were always a cranky old spy. In Captain Marvel, we’re getting to see a brand new version of Nick Fury! He’s younger. He has both eyes. He doesn’t seem to mistrust every person under the sun. He even pets Goose a few times. We’d almost dare to call him one friendly guy… you know, the kind of person you’d invite over for Sunday brunch.

Of course, we get glimpses into Nick’s future in The Avengers and Captain America movies, so we know now that he has to toughen up in order to become S.H.I.E.L.D.’s top man. For now, let us just revel in this kinder and peppier version of the guy!

This Nick Fury Pop! bobblehead figure brings you the Nick Fury from Marvel’s Captain Marvel! He’s wearing a snazzy shirt, tie, and suspenders, making him look like one proper secret agent. He hasn’t had the little accident with his eye yet, so there’s no eyepatch on this collectible figure! We recommend pairing this Funko Pop! with the Captain Marvel Goose figure, since those two seem to make the perfect duo, but you can also pair him with our Carol Danvers figure to help suppress the Skrull invasion!