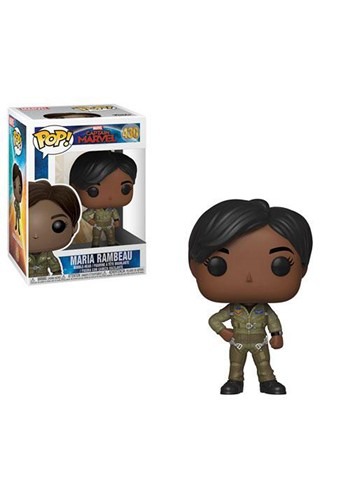 Maria Rambeau is one amazing gal! In the comic books, she was the proud mother of Monica Rambeau, the superhero known as Pulsar. She was a simple seamstress who helped her daughter make cool superhero costumes.

Of course, the MCU takes a little liberty with Maria’s history. In Captain Marvel, she’s even more amazing! She’s a top-notch fighter pilot who’s got Carol Danvers' back no matter what kind of crazy stuff is happening. Now, this little Maria Rambeau Funko Pop! bobblehead figure will have your back through thick and thin… even Skrull shenanigans.

This Captain Marvel Funko Pop! bobblehead brings you a collectible version of the character from the Marvel Cinematic Universe character. This cute little figure stands just under 4 inches tall and she’s wearing her flight suit from the movie. She even has a few badges on the front to let everyone know that she’s an ace pilot!

If you’re headed on a dangerous mission or if you’re trying to ward of an alien invasion, then you may just want a little backup! This Maria Rambeau bobblehead figure is ready to support you in all of your adventures… or she can just hang out with the rest of your Captain Marvel collection. She’s cool with either option.