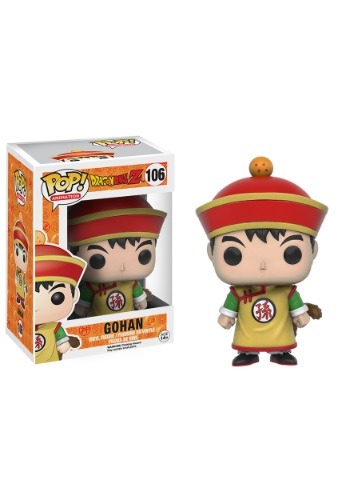 Who would’ve thought that Goku’s kid would be destined for greatness? Okay, so maybe everyone knew that Gohan was going to grow up to be one of the best fighters the world has ever seen! His dad is Goku, only the most powerful Saiyan to ever be born. His mom is Chi-Chi, the feistiest woman on the planet… ever. And, of course, he gave Raditz a scare when his power level went through the roof. Still, looking at this adorable POP figure of him, he looks like just a little cutie!

This Dragon Ball Z POP vinyl depicts little toddler Gohan. That’s right! This Gohan POP depicts him before he defeated Cell as a teenager, before he became Saiyaman and before he had a kid. He’s wearing his old green and gold color scheme and he even has the 4 Star Dragon Ball on his head. Make sure to set him up next to your Goku figure, since he always likes spending some quality time with his dad!