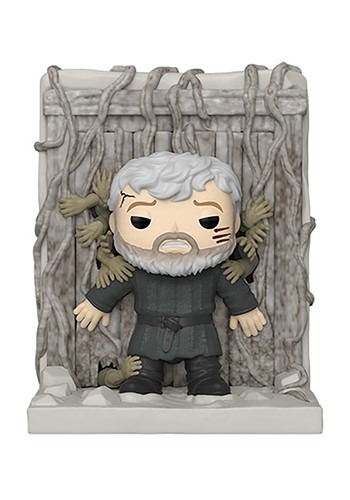 Listen, a lot of people died in Game of Thrones. A LOT of people died. We didn't get teared up about a lot of those deaths, but Hodor? Hodor's final scene wrecked us. We had to call in sick to work the next day just to deal with the emotional aftermath. We're convinced that he's the bravest man in all of Westeros and his memory deserves to live on through the ages! That's why we love this Pop! Deluxe Game of Thrones figure from Funko.

This Hodor Holding the Door Vinyl Figure captures the heroic moment when Hodor sacrifices himself to save his friends. The cute little figure holding the door as best he can, while the hands of wights claw and grasp at him. You can see the combination of determination and fear in his round, little Pop! face. We only wish he could have been granted a kinder fate, but we'll always appreciate his amazing sacrifice during that epic scene. If the Hold the Door scene tugged at your heartstrings or if you just want to give Hodor a nice, new home, away from all the dangers of Westeros, then this Pop! Deluxe Game of Thrones - Hodor Holding the Door figure is for you.