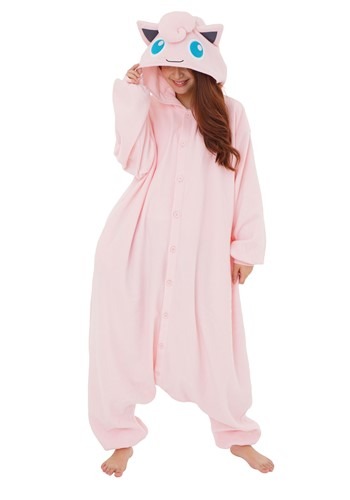 The Pokémon world is full of cozy creatures. We've often wondered which one of them is the cuddliest of all. It's a pretty tough choice because there's just so many of them! Pikachu seemed like an obvious contender... but then we rewatched the anime series and remember how many times he electrocuted Ash. Charmander is adorable, but he's just not the type you want to cuddle with, since his tail is bound to start something on fire by accident! Of course, there's one Pokémon who mostly just helps you get to sleep with her soft lullaby song... and that's Jigglypuff.

Yes, we think Jigglypuff takes the cake when it comes to being the most cuddly of Pokémon. Not only is she extra soft and adorable, but she can also use her song to help lull you into a nice little nap. And if you want to be extra comfy while you cuddle, then you're going to want this Adult Pokémon Jigglypuff Kigurumi!

This kigurumi is a Japanese-style pajama costume that's officially licensed from the Pokémon video game series. It's a single piece jumpsuit constructed out of a soft, fleece material. It fits with buttons down the front, but the best part about this kigurumi is the hood! The hood is shaped like Jigglypuff's face and has big cartoon eyes and a pair of point ears on top. Just wriggle yourself into this comfy costume and you'll be ready to single the Jigglypuff song to send yourself into a deep sleep!

If you want to be the cuddliest Pokémon of them all, then this Jigglypuff Kigurumi is your one-way ticket to cuddle town. The soft pajama costume works great for Pokémon cosplay or just as a comfortable way to get ready for your next anime marathon!