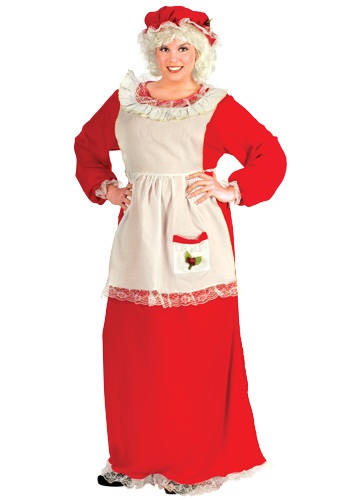 Can you imagine living the Mrs. Claus lifestyle? We imagine that, while living in the North Pole would be a pretty magical experience, Madame Claus would have a lot on her plate! For one, we'd like to know a little more about the distributions of responsibilities in the Claus household. Does the Mrs. order all of the food and supplies from south of the Arctic Circle or does Santa have some sort of automatic delivery system? Now that we think of it, how did Santa convince Mrs. Claus to move up to the North Pole, anyway?

Well, no matter what her responsibilities might be, the mistress of Christmas always seems to be in a good mood. Some people think that she's probably pretty lonely on Christmas Eve while her husband is soaring across the world, distributing toys to the little girls and boys. We disagree. She probably looks forward to the one night a year that she has all to herself. By that time she's probably done preparing the Christmas Day feast and she's ready to sit down with a cup of Egg Nog and watch those Netflix shows that Santa doesn't like.

Maybe you'll get an inside look at what it's like to live like Mrs. Claus when you put on this cheerful red costume. This ensemble looks like it came straight from a Christmas card, featuring a long sleeved ankle-length red dress with lace trim and a sweet white apron. You'll also get a red cap trimmed with matching lace to make your look complete. Now you'll be able to spread cheer like a pro!