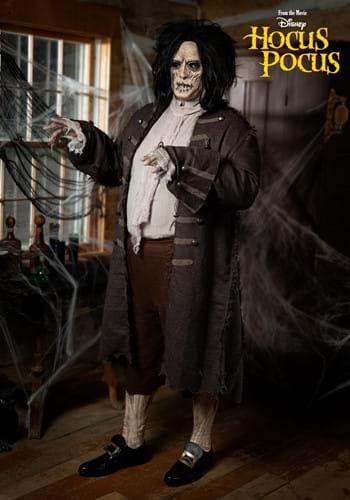 Exclusive
Pre-Order
Items Out Of Stock

It’s a bit unfair. The only image folks have for the walking dead are a bunch of hungry corpses looking to make a snack out of people. Yikes! Ever wonder what might happen if a zombie were given a chance to be a hero, instead? It didn’t take very long to hear the story of Disney's Billy Butcherson. (Really, the stellar concert put on by the Sanderson Sisters certainly drew a lot of attention, so it wasn’t that hard to hear about him.) It turns out that Billy started out a baddie but quickly realized that he could help the heroes, too! From spellbook fetcher to losing his head and helping the good guys win, this undead dude has really got a story to tell!

If you would like to play out the tale of the zombie who saved Halloween, it’s time to chant Hocus Pocus and conjure up this officially licensed Billy Butcherson costume. The woven jacket features netting that gives your clothes an aged appearance while the shirt and cravat keep you in old-Salem style. Don’t fear that your legs will betray your living status because the printed socks look like a pair of bandages! If you’re wondering how you’ll pull off the century-old facial features, the Billy Butcherson mask is here to help. From his stitched mouth to wild hair, you’re ready for adventure. Just give a ring to a few friends and the rest of our Hocus Pocus costumes will make for a perfect group outing.