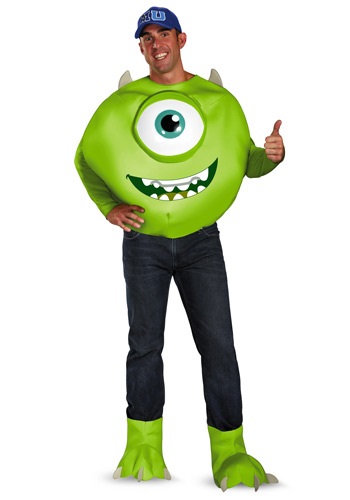 What makes a good monster? Some people would assume there would be plenty of muscle and growling involved. Other folks might think a truly effective monster exudes plenty of slime as they sneak into the rooms of the scream makers. There are other options, of course, pale skin with sparse, long dark hair and gnarly long limbs will always give us the shivers but we don't think Pixar would find that particular nightmare very family friendly.

If you're looking to get into Monsters University, there are honestly easier ways than dressing up as Mike Wazowski. Unless you're not really into the idea of becoming a scream wrangler. Maybe if Mike would have gone to college for literature he wouldn't have faced so much intense competition. Training to become a scream wrangler is a tough business! We're pretty sure you can make that dream career happen though, you've got that scream wrangling spirit, we can tell.

Give poor, young Mike another chance in this deluxe green costume. This bright green tunic will cover your torso and has 3-D eyes, a printed on smile with braces, and horns on the shoulders. Don't worry about those arms of yours, they'll be covered in green sleeves. You'll also get some clawed boot covers and a blue Monster's U hat to make your eager freshman year Monster University look complete. You might not be equipped with slime, fangs, or a scary howl but you'll be successful in' your own way. Have you considered a career in comedy?