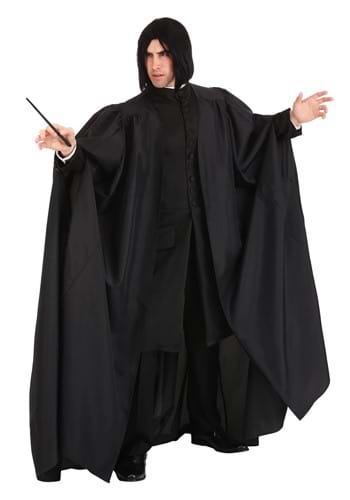 Please Don't Let Him Be Misunderstood

Is Snape a bad guy? It's complicated. Some treat him like a villain for his callous and sometimes cruel behavior towards Harry Potter. And some cannot look past the fact that he acted as an agent for Lord Voldemort. However, not everything is what it seems.

Severus Snape spent his years walking a thin line between good and evil. He wrestled with his soul, put aside his sense of morality, and got his hands dirty in order to protect Hogwarts from a much worse fate. He forced himself to do terrible things, in the service of the greater good. It might not be the kind of role that wins a lot of medals (or friends, for that matter), but without playing his role of double agent, the entire world may have succumbed to the power of Lord Voldemort! As mere muggles, we're pretty glad Professor Snape was secretly undermining the Dark Lord, because we definitely don't want to live in a world ruled by that guy.

Anyways, if you're ready to secretly thwart the plans of the greatest evil the wizarding world has ever seen, then you're ready to dress up in our Deluxe Harry Potter Severus Snape Costume.

This Deluxe Plus Size Severus Snape Costume brings you a recreation of the outfit worn by the Hogwarts professor. The costume starts with a frock-coat and a shirt front designed to look like the primary garments of Snape. The coat fits with buttons down the center. The robe fits over the coat and the sleeve even features a small pocket, specially designed to be a wand holster. That means you can always be at the ready for a wizard battle!

The Unsung Hero of Hogwarts

If you want to carry on the legacy of the unsung hero of Hogwarts, then this Professor Severus Snape Costume is an easy choice!