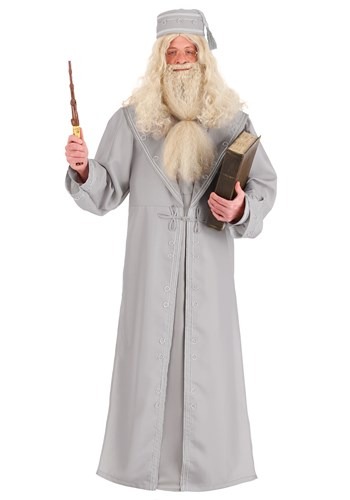 It's not really up for debate. Dumbledore is the greatest of all time (G.O.A.T.). He played a major role in the Global Wizarding War, he served as the headmaster at Hogwarts for over 30 years, he dueled against Voldemort as an equal, and he managed to protect Harry Potter until he was old enough to finally put an end to Voldemort's evil schemes. It would take a normal wizard multiple lifetimes to add so much to the world of wizardry and witchcraft!

If you want your chance to make a mark on the magical world, then you're going to want to take a note from Albus Dumbledore's book. In fact, you might want to start by copying his impeccable fashion sense!

This Plus Size Harry Potter Dumbledore Costume is a deluxe costume inspired by the character from the Harry Potter movies. It comes with a jersey knit tunic with silver buttons and silver braid accents to give it a spellbound appearance. The matching jacket fits over the tunic had has a jersey shawl collar, along with a fastener at the waist. To complete the look, the costume comes with a foam-backed hat that has a tassel on the top. Put it all together and you'll look just like the famous wizard from the films!