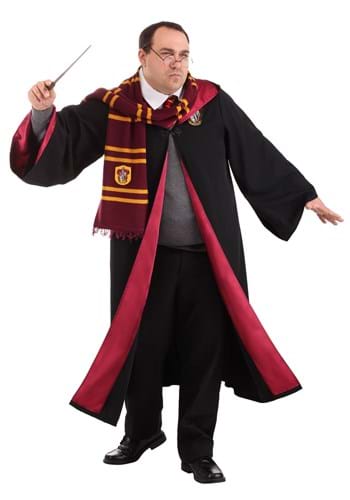 Hearing those words at last, Robert sat up from the Days Inn floor where he was sleeping and looked all around. In the dim light cast by the built-in, flickering night light in the bathroom, he saw the hulking figure of someone in the narrow space between the bed and the desk that they had crammed into the corner.

“You’re a wizard, Robby. Get your stuff, it’s time to go to The Wizard University of America,” the figure said. Uncle Sam lunged for the light and illuminated the scene fully, from the McDonald’s wrappers that they had littered around the room last night to the figure looming in the room. It was Dwayne ‘the Rock’ Johnson. All Robert could think was, “I knew it.”

Finding the best Harry Potter costume just became a lot easier with this Plus Size Deluxe Harry Potter Costume! This “Made By Us” costume was put together by our hard working and careful artisans, so you will feel good about wearing this for years to come. Even if they change the rules so you can wear muggle clothes around all the time in later years, you will still be happy to have this! The included hooded robe with the Gryffindor crest, the soft knit sweater, dickey, and tie complete the look. You will look like you belong in the wizarding world for sure, whether you go to school in America or England.

If you are looking for the best costume to make you feel like a Hogwarts student, then you will love this one! Even if your magic skills never materialize, just show up to Hogwarts anyway. What’s the worst that can happen?