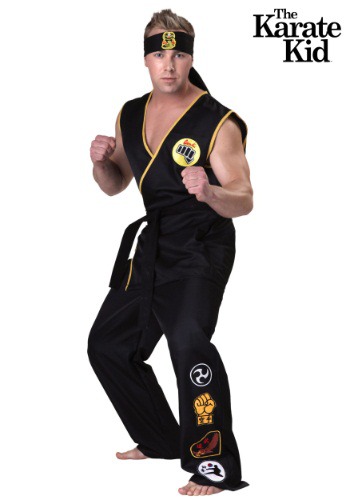 Finding your place in the wide world of karate dojos is a big task, but you worked hard at it. You have finally made it to the big leagues and are fighting for the best dojo in the entire world- the Cobra Kai. There is no doubt in your mind that you are one of the best, now.

Still, ever since that other kid kicked your best fighter in the head to win the tournament, you have had to wonder if you guys really were the best. Well, no more! Now, with this new and improved costume, you will be sure to intimidate your foes into inaction. Well, maybe it won't really work like that, but even if you aren't the best at karate, you will undoubtedly be the best dressed!

When you finally decide to fight with the winning team, you will be best served by adopting their team uniform with this Plus Size Cobra Kai Costume. No matter your age, there is no excuse for not dressing the part when you have joined the Cobra Kai! As such, make sure your black belt is tied just right. It is a key element to the intimidation factor of this uniform, along with the many patched and snake symbols stitched into the costume itself. This high-quality "Made By Us" fighter garb is the perfect way to show all those other weaklings that Cobra Kai is Number One!

If you are looking for the best way to dress yourself up to impress all the other fighters in your dojo, then you are in the right place. When you show up in this costume, there will be no doubt about who is the strongest fighter in the world!