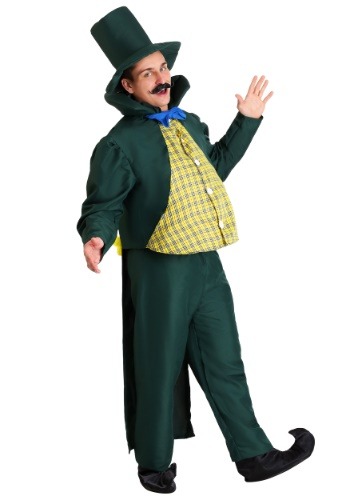 Workers uniting under a single banner in order to claim more rights for themselves is almost always a good thing, until that union becomes a corrupt entity in itself. This is exactly what happened in Oz when the Lollipop Guild got big enough that they nearly controlled the economy and politics of Munchkin Land.

Big Lollipop became so entrenched in the local elections that they could almost name their candidates. Luckily, the Mayor was immune to all of their corruption, which is why he was elected every year for the last two decades! His insane wealth and power are totally separate from his familial connections to the Guild, and the fact that he loves lollipops is also immaterial!

Becoming the famous and successful politician that you always dreamed you could be is as easy as donning this Plus Size Munchkinland Mayor Costume. The power to shape the lives of all the citizens around you is kept in this emerald green poplin jacket and pants. The top hat adds that fancy flair that will make the citizens of Munchkin Land fawn over your fancies and the boot covers make the whole costume pop. This “Made By Us” costume is of the highest quality and craftsmanship, which will hold up for years to come. You will look downright spectacular in this costume!

Looking your best is just as important as the policies and decisions that you will make to shape the city around you, which is why you will love this costume so much. Just try to make sure that you keep the witches and wizards out as much as possible!