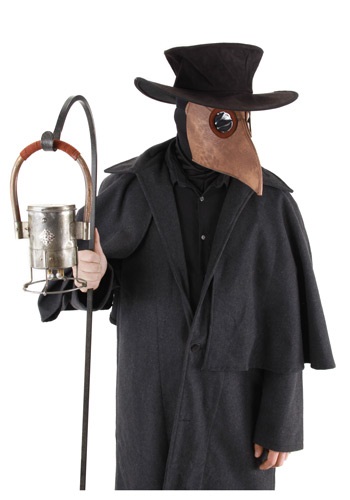 What do you think would be scarier, seeing a plague doctor, or being a plague doctor? We know this seems like a strange question, but think about it. These plague doctors look terrifying, we know. Just look at that horrifying mask, the idea that anyone would wear that to HELP people seems more than a little strange. It looks like a bird; if the bird was a terrifying monster out of a scary movie.

As scary as they might appear, we think being a plague doctor would be worse. You only need plague doctors if you are dealing with plagues. That means that wherever they exist, they are in the middle of some of the worst diseases on the planet. They are trying to fight some invisible force that is killing everyone around them. Sounds terrible, doesn't it? As bad as they look, being one would be worse.

This Plague doctor kit leaves you with the most important part of a plague doctor costume: The mask! Not only that, we have also included a hood and hat, so that all signs of the human underneath the mask will be covered. You will look terrifying!

WHAT KIND OF PLAGUE DOCTOR ARE YOU?

What kind of plague doctor are you? Are you the kind that helps people, or scares people? Whatever you choose to be, we hope that you do it well, and more importantly, that you have fun!