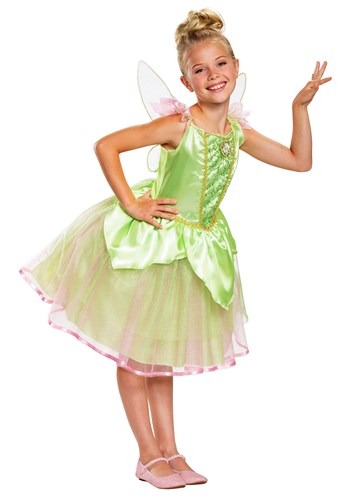 Your child has shown you that they can do just about anything they put their mind to. When they first tried the monkey bars. they whispered their worries under their breath. But then they clapped their hands and shouted that they would make it across in one attempt. And they did. For their birthday in class, they were told they’d get to play teacher’s helper and read to the class during break. Not wanting to stumble and be nervous for the day, they promised to learn their favorite book line for line. And, of course, they did great!

The only small thing that they can’t seem to master is the use of their make-believe wings. Since the day they watched Tinker Bell sprinkle dust over Wendy to send her to Neverland, your child has wanted to earn their own fairy ways. They watch every Tinker Bell movie and study her magical skills. At playtime they hop and spread their arms wide, hoping they’ll catch flight. And at bedtime, they drift into Tinker Bell dreams where they never fail to soar through a starry sky made just for their fairy delights.

Help your child take flight with this Peter Pan Girl’s Tinker Bell Costume. They’ll be thinking nothing but the happiest thoughts when they dress in this magical ensemble! The fairy tale outfit starts with a dress that looks like its infused with pixie dust. The satiny bodice and glittering layers of pink and green tulle will catch the light as they twirl and pretend that they’ve found their way to Neverland. The gold-trimmed wings attach easily to their back and will bring your child’s make-believe pair to life! And with a cameo of Tinker Bell stitched to the chest, they’ll have their favorite character to cheer on their adventurous spirit!

Whether they’re heading to Neverland or Pixie Hollow your kiddo will be ready to fly in this officially licensed Tinker Bell costume! With a sparkling dress and matching fairy wings, they’re sure to keep believing that even their wildest dreams can come true!