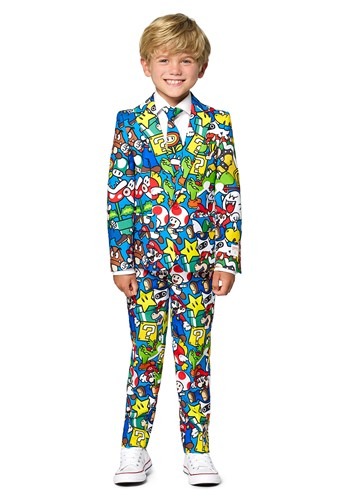 The Super Mario Bros games feature a TON of power-ups! The Super Mushroom will turn you giant-sized. The Fire Flower lets you sling hot balls of flames at any baddies. The Super Star makes you invincible for a short period of time and the Tanooki Suit lets you fly through the sky... like a raccoon? Well, that one still puzzles us a bit. We've never seen a raccon fly, but we have to admit that it's a pretty sweet power-up! but we've got a brand new power-up for young Mario fans! It's the Super Mario Opposuit! Want to know what it's super power is? Dapperness.

This Super Mario Bros Opposuit for kids is one suave look for any young Nintendo fan. It combines the sleek look of a fancy suit with the video game world of Mario. It comes with a suit jacket that has a 2 button front and an explosively colorful pattern on the exterior. The pattern includes everything Mario, including Mario and his pals, Toad and Yoshi. It also has plenty of awesome Mario power-ups, like the Super Mushroom, the 1-Up Mushroom, and the Super Star. It even has a few of Mario's greatest foes, like Bowser and Cheep Cheeps (the fish that terrorize the water levels). The pants feature the same wild pattern on them and they fit with a zip fly. The pants are long to accommodate casual footwear. Finally, the matching tie puts the finishing touch on this outfit! It's a clip style tie with a matching pattern to the suit. Put it all together and you have one dapper look to take to the Mushroom Kingdom.

Your child can really take their formal look to the next level with this official Opposuits set! Even Bowser will be powerless to your child's unmatched style!