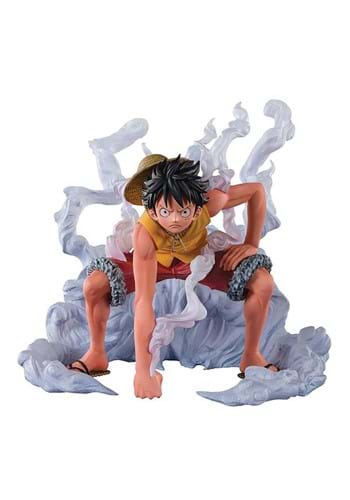 Sometimes, you just need a little more oomph. You know, that little extra move that helps you kick it up a notch. When it looks like you're going to lose... that's when it's time to pull out all of the stops and use up every trick you have in your bag. Monkey D. Luffy, he's got a trick or two to use before he calls it quits, and perhaps one of his most deadly techniques is Gear Second. What you're witnessing here in this officially licensed One Piece collectible is Luffy getting ready to dish out a big ol' dish of beatdown and he's initiated his Gear Second ability. The steam rising out of his body means things are about to get real.

This Monkey D. Luffy Paramount War One Piece Figure is inspired by the character from the Eiichiro Oda anime series. The highly detailed statue is made out of polyresin material and captures the Straw Hat leader's look from the Paramount War arc. He's covered in steam and has a determined look on his face! The figure measures just under 5 inches tall. The figure is a perfect centerpiece for any One Piece fan.