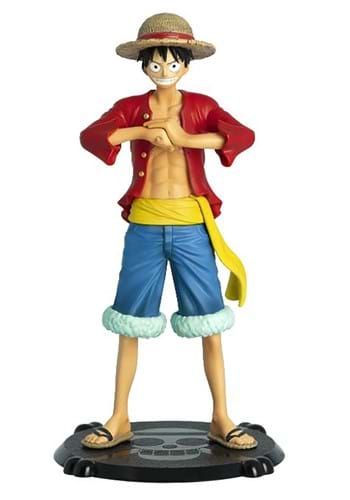 Monkey D. Luffy's profession is battling it out with villainous pirates... and business is good. During his long tenure as captain of the Straw Hat Pirates, he's faced off against some heavy hitters. He defeated every powerful challenger in the East Blue. He eventually took down Crocodile, the notorious leader of Baroque Works. He's even conquered the might Donquixote Doflamingo. Now, he's looking to take on your collection!

This One Piece Monkey D. Luffy Collectible Figurine recreates the character from the Eichiro Oda anime series. The figure is made out of molded PVC material and stands 6.5 inches tall. He comes with a display base and snaps onto it with ease. The base has the Straw Hat pirate symbol on it and helps Luffy stand his ground! The figure itself is modeled after his appearance after the 2 year time skip in the series, so he's sporting his red cardigan and his signature straw hat! He's locked in a "ready to fight" kind of pose! He's a great addition to any One Piece collection!