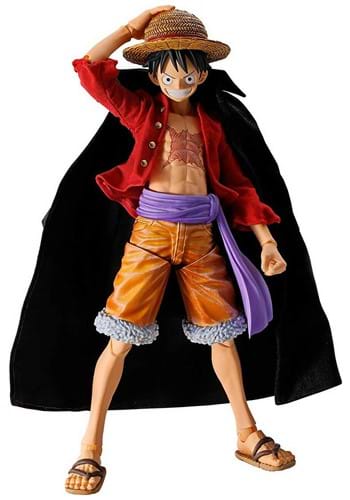 The Captain Is Coming

Lock up the fridge before you add this One Piece Imagination Works Monkey D. Luffy Figure to your collection! Who are we kidding? No lock can keep Luffy out of a fridge. Before the future King of The Pirates can be your honored guest there are plenty of preparations you need to make. It's time to hit the books. We're of course talking about all those cookbooks gathering dust on your bookshelf. While Luffy is more than willing to visit your humble abode, it's your job to 'wow' him!

How do you 'wow' the captain of the Straw hat Pirates? Well, you need an amazing spread set up on the dinner table for starters. Besides that, we're sure Luffy would appreciate any clues you might have about the whereabouts of a certain hidden treasure known simply as The One Piece. If you don't have any clues to offer make sure you have plenty of meat!

This collectible figurine features Captain Luffy in his usual attire. He is wearing his red shirt. It is unbuttoned and shows off the amazing scar he received from Akainu. Luffy has on his orangish/tannish shorts as well as a purple sash around his waist. Naturally, Luffy is wearing the straw hat he received from Red Hair Shanks. Lastly, Luffy is donning an awesome black cape!