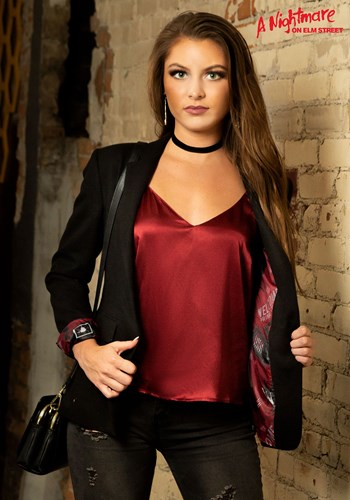 In dreams, anything can happen. Many of them even make the impossible, possible. For those who live on Elm Street, dreams herald Freddy Krueger, the villainous man of nightmares. This Nightmare on Elm Street Women's Blazer does both. It makes the impossible, possible and heralds the man of terror. It combines horror movie villain, Freddy Kruger, with a formal blazer, for a look that's both freaky and fashionable.

Fashion meets Freddy with this Nightmare on Elm Street Women's Blazer. On the exterior, this blazer has all of the features of a formal suit, such as notched lapels, a single button closure in front for ease of movement, and functional pockets. Perfect for a casual day in the office! The interior, however, comes with a terrifying surprise—Freddy Krueger. The satin lining has a Freddy-themed pattern, letting you secretly bring your love of horror movies to any occasion. Wear it with jeans for a casual look or pair it with some slacks to take it the look to the office!