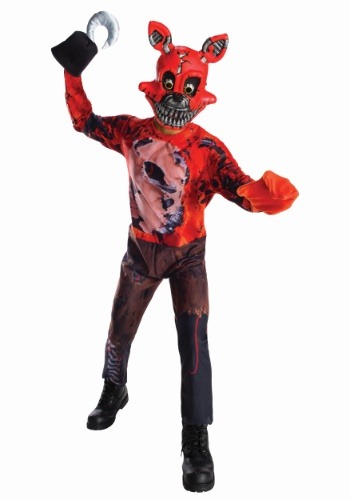 What's more fun than playing games? Games are a happy side of life. They are supposed to be all sunshine and rainbows, how could anything go wrong? Wait, what's this game, Five Nights at Freddy's? Whose Freddy and why is his house so twisted? Where does this guy relax? Because we certainly wouldn't want to kick back with some popcorn and zone out around these freakish animatronic animals.

Things start to get real in this hellscape when little Foxy shows up on the scene. With a hook for a hand and a body that seems like it shouldn't even hold itself up this animal is the last plushie that we'd want to see while cleaning out our closet. His fighting skills don't stop with the obvious hook on his hand, oh no! He's got sharp toes and even sharper teeth making him the guest from. . . well, our nightmares. Maybe that's why they call him Nightmare Foxy! Huh, that name fits him like a glove.

This Halloween, you can show up on the scene solo as this fearsome fox or you could pair up with your other scary friends to go as all the main characters from Five Nights at Freddy's. It'll be so much fun to creep up to the party with Bonnie and Freddy to spread the fear that Halloween is all about! There's no shutting the closet door on you once you're dressed up in this easy-on all-over print jumpsuit. It's topped off with a plastic molded mask and mitts including a plush metallic hook hand. You might not be all sunshine and rainbows but everyone better be ready to play!