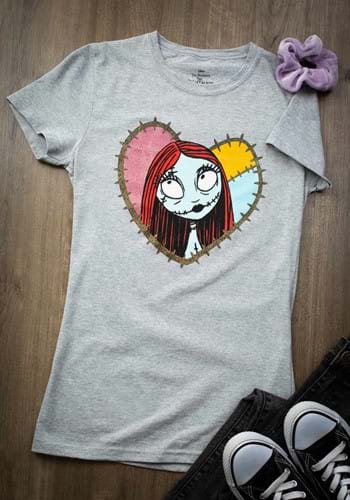 We would say Sally is yearning personified, but she doesn't quite fit that definition -- you know, because she's a doll. One of the primary protagonists in the 1993 Disney classic stop-motion film The Nightmare Before Christmas, Sally yearns for a lot! To be independent, to ditch Dr. Finkelstein, and for the affection of the Pumpkin King Jack Skellington.

Kind, sensible, and incredibly clever (a must when you're stuck with the town's resident mad scientist), Sally reminds a lot of folks of themselves with her restless intrigue of the wondrous world. So why wouldn't you want her on a shirt of your very own, if only to telegraph to others your affinity for her?

It's highly likely you'll get a nod or knowing smile when you're wearing this out and about. Fellow spooky women will know you're one of them when they see Sally yearning inside the graphic stitched heart on your chest. This Juniors Nightmare Before Christmas Sally Stitch Heart shirt is 90% cotton and 100% officially licensed, so you can worry less about the quality of its colorful graphics and worry more about finding the dashing Jack Skellington to your endearing Sally Stitch! Ah, we love a happy ending.