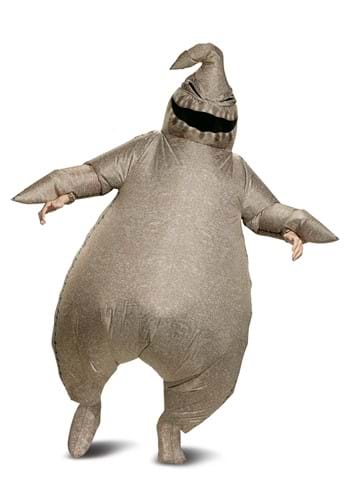 Oogie Boogie gives everyone the heebie-jeebies. As the Boogeyman, we know that’s appropriate. But his skin is literally crawling with bugs. His mouth and eyes are flooded with creepy-crawlies. It’s gross. Just imagine the slime and squish-ability of his insides. Do you suppose he needs to replenish the bugs ever? Or, worse, do you think the bugs handle refills all on their own? Stepping around that horror show... The point is, Oogie Boogie is a thing of nightmares. At least, for anyone terrified of bugs, or we suppose sentient burlap bags. That, of course, makes him a perfect Halloween character. If you want to see people shiver and turn your next costume party into a scream, you won’t be disappointed when Oogie Boogie accepts your invite—we know he’ll accept because you’re going to dress as the spine-chilling monster. All you need is this Nightmare Before Christmas Oogie Boogie Inflatable Costume.

Becoming Oogie Boogie is easier than ever with this one-piece costume. Zip into the suit from the back and switch on the single fan to get your costume up and running. You’ll have the shape, look, and movement of Oogie Boogie without dealing with scratchy burlap or multitudes of bugs crawling over your skin. And despite missing the tiny terrors that give Oogie Boogie life, this officially licensed costume is just as nightmarish with its sculpted face and gaping grin.

If Oogie Boogie is good at anything but striking fear into people, it’s probably striking a pose on the dancefloor—being full of bugs, he never stops feeling the movement. Skip the bugs but embrace the boogie Boogie for your Halloween party with this Nightmare Before Christmas Oogie Boogie Inflatable Costume. Whether you team up with Boogie’s Boys or throw down in a dance-off against Jack Skellington, this ghoulish look is sure to have you feeling the groove!