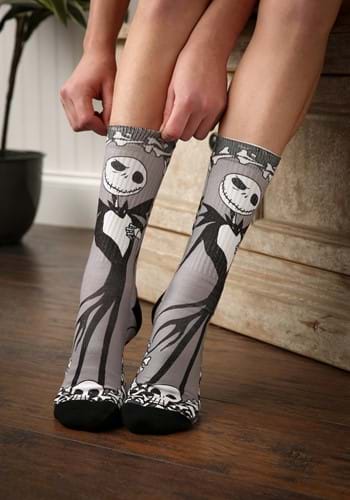 If there's anything we know about the Pumpkin King it's that he's got a definite sense of flair. You might think he got his Halloween Town title from his ability to scare. Think again. Jack simply isn't that scary. Sure, he can take off his head but he's reciting Shakespearean quotations as well. That's not frightening, it's simply confusing! Yes, it has to be his style that gave him his status in his ghoulish hometown. After all, we don't know anyone else who rocks a bat bow tie.

We think Jack would like these slick socks. They have a distinct flair with the Pumpkin King posing with debonair confidence on the back and front. The tail of his tuxedo jacket blows in the wind and accentuates his spindly figure. Jack is framed by a cartoonish illustration of bones and a skull. The socks have a stretchy top and a black heel and toe. Sure, maybe you can't pull off a bat bow tie but you'll sure feel snazzy in these socks!