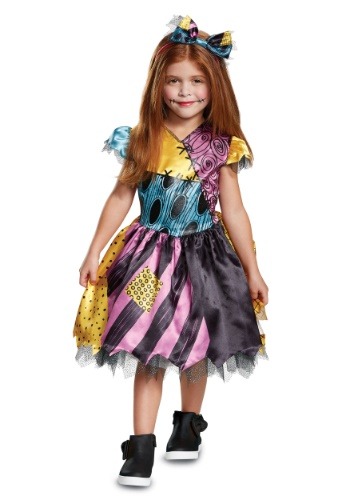 If most little girls at school are dressing up as their favorite pop culture princesses, your little darlin' is marching to the beat of a different drummer. Even though she's pint-sized, she's wise enough to know that crowns don't signify importance, diamonds aren't a symbol of strength, and marrying a prince doesn't solve all problems. Progressive youngsters who've figured this out like Sally more than other popular animated princesses. The tenacious rag doll IS heroic, sensible, crafty, and doesn't allow Dr. Finkelstein to treat her like a piece of property. As Jack Skellington puts it, "she's the only one who makes sense around this insane asylum." Sally's one smart cookie and she doesn't allow anyone to control her. She's a character worth imitating.

Support your daughter's natural knack for choosing good role models by gifting her with this classic infant Sally costume. Although she's young, she has a great head on her shoulders. It sounds like you've got nothing to worry about, mom and dad!

Kids love wearing this patchwork dress because it's bright, colorful, and instantly transforms little Nightmare Before Christmas fans into a mini version of Sally. The attached sparkly black tulle creates a full silhouette perfect for spinning and twirling while short puffy sleeves give the classic appearance of a fancy dress girly-girls will love. You'll also receive a matching bow headband to keep their hair from becoming disheveled while running from house to house collecting candy.

Even though this is a complete costume, there are ways to accentuate it with coordinating costume. You can dress up as Jack Skelloington to create a cute parent/child costume. If you have other children dress them as Lock, Shock, and Barrel; maybe even Oogie Boogie if they really want to be spooky.