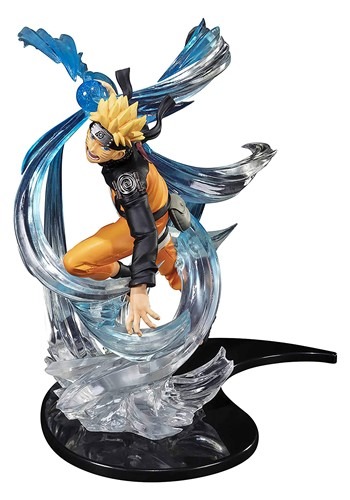 Who’d have thought the #1 Most Unpredictable Ninja would be the one to complete an A-Rank jutsu that even the Fourth could not? Well, okay, Naruto fans probably had their suspicions that he could get it done. And chances are, you’re here because you either are or know a loyal Naruto fan that wants to show their support in spectacular fashion. You’ve come to the right place!

Cheer on your favorite anime and manga character with this stunning Naruto Uzumaki Shippuden Kizuna Relation Collectible Figure! Modeled in PVC to show Naruto performing his wind release Rasengan and inspired by the swirling chakra that forms the powerful attack, this officially licensed figure makes an impressive display of Naruto’s abilities. Meanwhile, proving that friendship is an essential part of Naruto’s strength, the base is shaped to fit together with other Kizuna relation figures of Shippuden characters.

Whether you're in need of a gift for the Naruto mega-fan in your life or you’re looking for something special to show your support for the hero of the Shinobi world, this Naruto Shippuden Kizuna Relation collectible is for you. Pair with other Kizuna relation characters in our selection for a display every fan will envy!