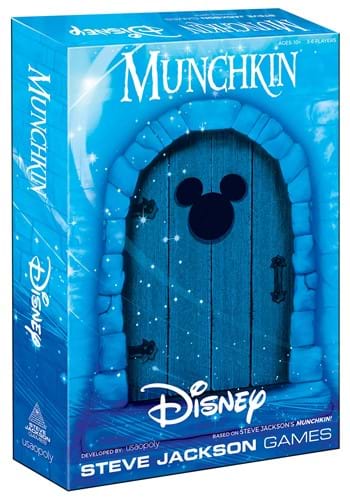 Has this ever happened to you? You settle in for movie night. You're watching one of your favorite Disney movies, like The Little Mermaid. You watch Ariel make a few silly mistakes and she ends up falling prey to Ursula. How could Ariel get duped by such an obviously evil character? Then, you start to wonder. If YOU were in Ariel's shoes (er, fins maybe?), then you would totally put that villainous sea witch in her place!

Well, with Munchkin: Disney, you have the opportunity to face off against Disney's most infamous villains. Collect treasure, learn new roles, and see who can villains that quickest!

This officially licensed card game puts a Disney twist on the classic Munchkin gameplay. It comes with a variety of cards, including a treasure deck, a door deck, and role cards. Players take turns opening new doors and facing off against various Disney villains. Win the battle, collect treasure, and level up! The first player to get to level 10 wins... but watch out! Other players can sabotage you during your adventure, so you must concoct crafty strategies to outwit your opponents as well as the Disney villains that wait for you! This is a great game for ages 1o and up, and 3 to 6 players can play!