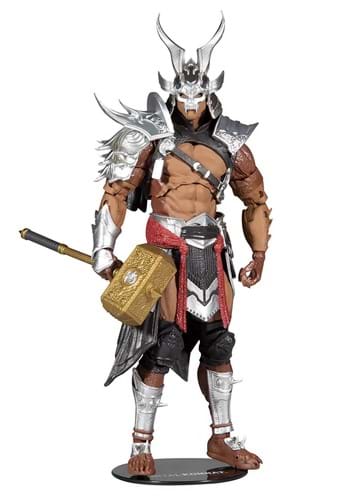 Shao Kahn is one of those guys you wouldn't want to see at the end of a dark alley. Well, you probably don't want to see anybody in a dark alley, except maybe your mom with cookies in hand or something. Anyway, Kahn has been the big bag of Mortal Kombat since his debut in 1993. If you are a fan of Shao Kahn looking for a Mortal Kombat collectible, then you are in the proper realm! This action figure shows Shao Kahn in all his platinum glory. Who knew his armor could look any more remarkable than it did in the original games? Kahn's iconic gold Wrath Hammer really makes it hard not to gawk at this detailed action figure. With 22 points of articulation, you will feel like you are the ruler of Outworld. If you are a fan of the villain or MK in general, we know you will crack, and evil cackle for this officially licensed Mortal Kombat XI Shao Kahn (Platinum) 7" Action Figure.