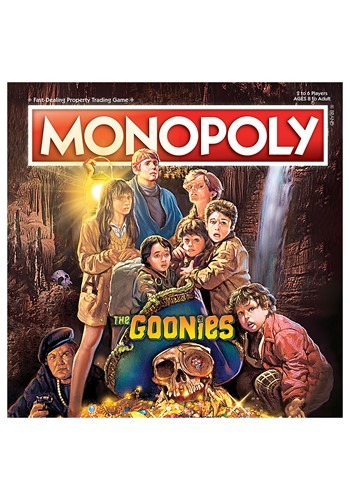 What is to be done when things aren't going so great in your home town? You could pout at home... or you could grab your friends and leap into an epic adventure while uncovering the truths of an urban legend! (Plus there might be a hoard of gold and gems, too.) On your marks! Get set! Now, pass GO! and collect $200. Huh!? That's right: it is time to see the Goonies go Monopoly!

In-fighting is bound to happen whenever Monopoly is the name of the game. But, when you're on an adventure together with this officially licensed Monopoly: The Goonies edition, it's a whole other matter! Choose your token from a golden doubloon or the skull and crossbones of the pirate flag. Get right with the community when you "Never Say Die" or risk it all with a "Hey You Guys" card. Collect your favorite locations from the film and you just might save all of Astoria!

Once you own all of the mysterious locations of Astoria, Oregon, you and your friends will be able to explore the strange crypts of One-Eyed Willie's lair for years to come. Gather up your doubloons and set sail for adventure with the Goonies in this themed Monopoly board game.