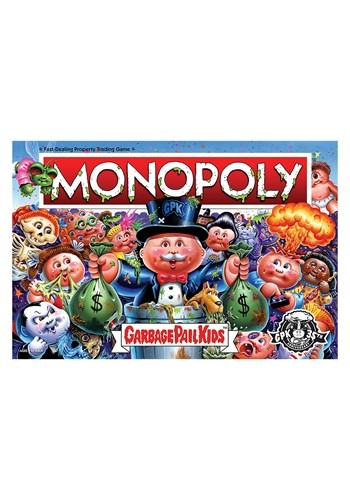 A New Kind of Garbage Route

After decades of a certain kind of popularity, the Garbage Pail Kids are back on the block. And, boy, are they cleaning up! (Or is it the opposite?) It's hard to say when you're talking about characters with names like Nasty Nick, Adam Bomb, Leaky Lou and Lindsey. They aren't particularly known for their cleanly habits. It really makes you wonder why their property values are sky high! Is it because of their rarity? Maybe their unique presentation just keeps driving up tourism sales. The only way you'll ever know is by taking a trip around the block and discovering for yourself!

Explore the world of the Garbage Pail Kids in a way that won't have you begging for noseplugs when you play Monopoly the way that Adam Bomb loves... with this Garbage Pail Kids Edition! The game plays just the way you're used to but all of the locations are replaced with the most iconic kids you've ever known. Collect a trio of these troubling tots and avoid paying your clean up fees as you pass Go, win your cash, and aim for the ultimate horde of Garbage Pail Kids.

You'd expect a community with the Garbage Pail Kids to be in just terrible condition. But, when they all work together to put this Monopoly Garbage Pail Kids Edition together, they really clean up! That said, you're probably going to want to hang out in Jail for a few extra rounds when going for the win in this quirky version of Monopoly.