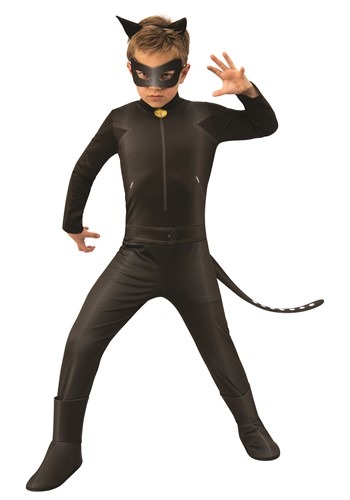 More Than Meets the Eye

At first glance, it might seem like Adrien Agreste has it all. His family is rich, his dad is a famous fashion designer, there's this really nice girl in school who has a secret crush on him, and he's secretly the superhero, Cat Noir, who can use his power over bad luck to give villains a seriously bad day!

... but his dad may or may not secretly be a bad guy and the girl who likes him in school also happens to be The Miraculous Ladybug... who can't stand him in superhero form. To top it all off, if he actually uses his best superpower... he has to go back into his normal Adrien form in about 5 minutes. He's got a lot more problems going on than meets the eye, but he's always up for a challenge!

If your child never runs in the face of a challenge, then perhaps he's ready to become the one and only Cat Noir from The Miraculous Ladybug. This officially licensed kids costume is based on the character from the show, it starts with a simple jumpsuit that has an detachable tail in back. It features printed details from the show on the front and back, including the cat emblem on the neck, just like Cat Noir from the series. The mask covers your child's eyes and fits with an elastic band. To top the whole look off, the costume comes with at cat-ear headband that fits on top of your child's head. The whole ensemble will have your young crime fighter ready to face off against the forces of Hawkmoth!

Time to Play the Hero

If your child is a big fan of the series, or if he's the type to never run away from a fight like Cat Noir, then this might just be the costume for your young hero!